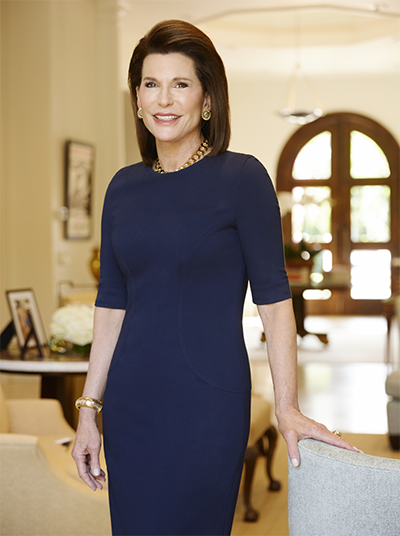 The Academy of Oncology Nurse & Patient Navigators (AONN+) is pleased to announce Nancy G. Brinker as the Keynote Speaker for the 10th Annual Navigation & Survivorship Conference.

Ms Brinker has been called the leader of the global breast cancer movement. Her journey began with a promise to her dying sister, Susan G. Komen, that she would do everything possible to end the shame, pain, fear, and hopelessness caused by this disease.

In 1983, she founded the Susan G. Komen Race for the Cure® series, which is now the world’s largest and most successful education and fundraising event for breast cancer.

In 2009, President Barack Obama honored her with the Presidential Medal of Freedom, the nation’s highest civilian honor, for this work. The same year, she was named Goodwill Ambassador for Cancer Control for the United Nations’ World Health Organization, where she continues her mission to put cancer control at the top of the world health agenda.

In 2010, Ms Brinker released her New York Times best-selling memoir Promise Me, an inspirational story of her transformation from bereaved sister to the undisputed leader of the ongoing international movement to end breast cancer. She was named one of Time magazine’s “100 Most Influential People” in 2008. From 2001-2003, she served as US Ambassador to the Republic of Hungary and served as US Chief of Protocol from 2007-2009, where she was responsible for overseeing all protocol matters for visiting heads of state and presidential travel abroad. In 2008, President George W. Bush appointed her to The Kennedy Center Board of Trustees.

She is a lifetime member of the Council on Foreign Relations and has received numerous accolades for her global work, including the prestigious Mary Woodard Lasker Award for Public Service, the Champions of Excellence Award presented by the Centers for Disease Control and Prevention, the Porter Prize presented by the University of Pittsburgh Graduate School of Public Health, the Forbes Trailblazer Award, Ladies Home Journal’s “100 Most Important Women of the 20th Century,” and the Anti-Defamation League Americanism Award. She was named one of the 100 Most Trusted People in America by Reader’s Digest in 2013. In 2015, she was inducted to the National Women’s Hall of Fame, and in 2016 she received the Order of Lincoln Award, Illinois’ highest honor for professional achievement and public service. Her work also includes advocating for equality in the LGBT community, and she is honored to be a member of the Harvey Milk Foundation’s leadership and advisory board. Ms Brinker currently serves as Global Advisor to HOLOGIC Inc. and is a contributor to Fox News and Newsmax.

It is an honor and privilege to have Ms Brinker at the 2019 AONN+ Annual Conference. Stay tuned for more information on her keynote session.

Join us in Nashville to hear from Ms Brinker, as well as oncology navigation and cancer care professionals!

CRANBURY, NJ – The Academy of Oncology Nurse & Patient Navigators (AONN+) is thrilled to announce that Co-Founder Lillie D. Shockney, RN, BS, MAS, HON-ONN-CG, has been named among the 2020 PM360 ELITE 100 in the Master Educators category. Now in its sixth year, the PM360 ELITE (Exceptional • Leaders • Innovators • Transformers • Entrepreneurs) represent the most influential people in the healthcare industry today. The award is presented by PM360, the premier information resource for marketing decision makers in the pharmaceutical, biotech, diagnostics, and medical device sectors.

AONN+ Leaders Publish Research on National Platform
May 4, 2020 | Press Releases | News & Updates
Senior members of the Academy present their research findings to a national audience via the digital platform of a large professional oncology nursing organization.

Thank you to our Corporate Sponsors and Alliance Partners!